I was in the market for an HT and decided to take a look at what the “Big 3” were offering. My attention was drawn to the D-STAR Network after stumbling into a D-STAR video featuring the ICOM ID-51A.  After a little more research it became apparent the best choice for me would be the D-STAR Kenwood TH-D74A.

First rule of D-STAR: You must register!

I registered through HRO where I purchased the radio, and within a business day my registration was working. The D-STAR network checks for a valid callsign registration before allowing access. So you can’t work any D-STAR without the validated registration. It took less than 5 minutes to enter the basic required info via the web. I entered my info on a weekend, and it was working after the following business day.

The ‘gateway’ function was what really got me going on D-STAR. The digital repeaters have an internet gateway function that allows for connection to remote D-STAR repeaters and ‘reflectors’ around the world. Count me in! This is a must have capability at K6HR.

Finding my local digital repeaters was simple, and I quickly determined which repeaters I could access. The GPS feature enables you to find the local repeaters with the press of a button from a built-in database. Pretty slick!

I also quickly learned that the local D-STAR repeaters, although capable of gateway connections, do not necessarily permit them! At least, not to casual users. I can see that the best local repeater is always linked to a certain reflector. When I attempt to change the reflector, I get an error icon.

It didn’t take long to realize it is poor etiquette to show up on a repeater and change the reflector that many folks are monitoring! Bad idea. Now what?

No Problem. I just need to be a D-STAR Gateway!

There’s a gizmo for that! What I need is a Digital Voice Access Point or DVAP. The DVAP is an internet gateway interface that can be accessed via UHF simplex. Through the DVAP, I will have my own D-STAR gateway functionality. I wouldn’t rule out a full blown D-STAR repeater sometime in the future, but for now the simplex UHF DVAP will get the job done. 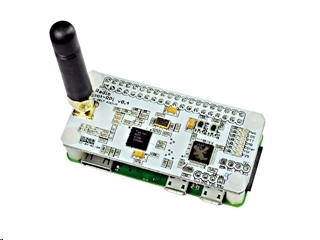 I am very pleased with the D-STAR Kenwood TH-D74A, and with the overall D-STAR experience thus far, although I am still learning the radio and studying the manual. The APRS performance is also outstanding. I’ve only scratched the surface of this radio’s capability.

The programming of the ZUM hotspot looks pretty straightforward. The DVAP will be included in the 2018 radio hardware upgrade taking place next month.

Pictured above: A QSO in progress with a mobile station in Scotland. He has a multimode hotspot in his vehicle so he can work the world on his way to work!

D-STAR is an exciting new facet of amateur radio here in the K6HR shack!

Back to the front…