I first became interested in amateur satellite operations around 1999 after reading an article about the upcoming launch of AO-40. After running multi-port terrestrial packet radio systems for many years, I was very interested in digital satellite operations. I decided to look into what it would take to build a high speed digital satellite station that would be fully compatible with the new and exciting AO-40.

I was dreaming about linking my packet radio BBS (with its longhaul HF PACTOR and local UHF/VHF RF forwarding ports) with the store and forward systems on the satellites. People were doing it. There were several key satellite ‘gateways’ worldwide already in operation. Very exciting!

As part of my research I joined the AMSAT-BB mailing list and read the mail for a while. I started asking questions and got some elmering along the way. With my questions answered, and on the recommendation of Mark N8MH, I started with a Yaesu FT-736R, Symek TNC3S, and a pair of m2 CP antennas (shown below) equipped with SSB Electronic preamps. The TNC3S and the installation of the Symek IFD and ZFD boards in the radio enabled data speeds of 9600, 19200 and 38400 baud. Blazing fast! Over radio! Via satellite!

I was working all the available store and forward birds. It was great fun exchanging messages and downloading satellite images of the earth from space.

Pictured below: The m2 436CP30 and 2MCP14 fully assembled and ready to be put into service @ Cerritos CA

My hopes of linking my land-based packet BBS with the satellite systems had started fading with the failure of AO-40, and with little activity on the few remaining satellites, I decided to cease amateur satellite operations in May 2002 and turn my attention toward HF.

Almost 10 years would go by before I would finally come back to amateur satellite operations in early 2011 . There were some new satellites going up and it looked like it might be worthwhile to give the satellites another try. There was a new tracking program that I wanted to try to replace the outdated ‘Nova For Windows’ software I used before. SatPC32 software [by Erich Eichmann – DK1TB] was widely used and fully supported, so I started there.

This time around I was a little gun shy concerning the investment considering my past experience w/AO-40. So if I were to get back into satellites, it was going to have to be on a modest budget, and I was going to have to verify activity before I invested any more resources in satellites. I put up a pair of eggbeaters and started listening with an ICOM IC-821. Unhappy with the eggbeaters, and wanting to do more, I purchased a Gulf Alpha 2M/70CM satellite antenna (now discontinued) which was a big improvement. I had the Gulf Alpha mounted on an AZ only rotor with a fixed elevation of 15 degrees. This worked OK and I was making contacts. 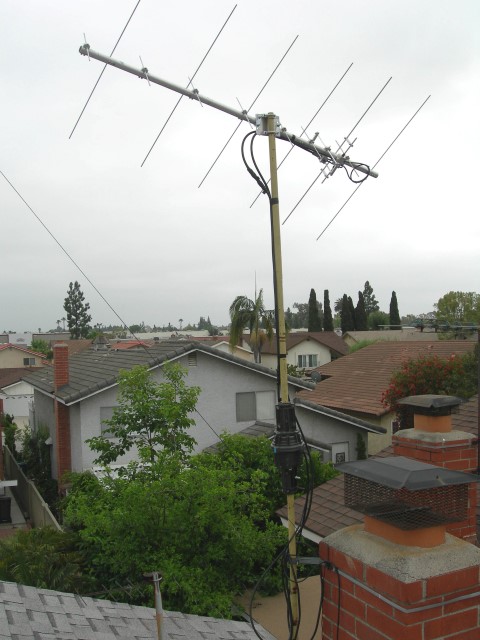 In February 2012 I heard about some guys that were working satellites using the Flex 5000 transceiver. I already owned a Flex and knew it would be much easier to work the satellites if I could see the signals in the Flex panadapter. So I decided to sell the IC-821 and upgrade my barebones Flex 5000 to a “VU5K” with 2nd RX. In my opinion, the VU5K has to be the best satellite radio ever made in terms of ease of operation. I was up and running and making contacts shortly after I got all the hardware configured. My amateur satellite operations were about to take on a new dimension!

Sometime around 2014 I met Dave W0DHB. Dave has written special software for Flex radio users that facilitates satellite operations when using SatPC32 software. Although SatPC32 worked great with many radio models, the command set was not optimized for use with Flex transceivers, and did not natively send setup commands to the Flex in preparation for sat operation. Dave’s FlexSATPC software solved all these issues. W0DHB FlexSATPC software sends all the required CAT commands to  ‘initialize’ the Flex for satellite operation such as setting mode, frequency, VFO-B TX status, RIT and XIT, and squelch. Dave continues to update and upgrade FlexSATPC and every version is more powerful than the last.

In March 2014 I came across a pair of KLM CP satellite antennas advertised online for $200. I figured there had to be a catch…

It turned out there was no catch other than I would have to drive 100 miles to meet the guy half way, and oh yeah, the other thing…They were on 19 ft. and 14 ft. booms! My measurements showed I could use them, but only at a fixed elevation around 40 degrees, and then, only when my HF antenna was parked in a certain direction. Yes, another compromise, but again, a big improvement in performance. I got some good reports on the linear birds. My signals were big.

Being the wheeler-dealer that I am, I would end up selling these two years later, in July 2016 for the same $200!

My workable passes were quite limited by my lack of elevation control. Another problem is the San Gabriel Mountains to the north block all signals once the satellite was behind them and below 20 degrees or so. So it was a challenge to get the most out of every pass. I was making contacts nonetheless.

After some research and more measurements, I determined that I could easily fit a fully AZ/EL rotatable m2 LEO (Low Earth Orbit) Pack on the roof. The LEO Pack would have an unobstructed turning radius vs. my HF antenna, which was a deciding factor. So, it was deemed to be a worthwhile investment. But before I could get the LEO Pack, I would have to find a killer deal on an elevation rotor and an AZ/EL computer interface.

After patiently scouring the ads on QTH.com and eHam for months, I was lucky enough to find an old KENPRO KR-500 elevation rotor and controller in working condition that was within my very limited budget. I wanted the EA4TX ARS-USB interface and knew I would never see one used anywhere, so I purchased that unit new from DXE. I purchased and installed the m2 LEO Pack in June 2016. The end result is the ultimate point and click OSCAR satellite station. There are plenty of working satellites in orbit as of this writing, and more planned. Now I just have to set aside more time to get on the air and make contacts.

Thanks to AA2TT for a long distance contact into New York via FO-29!

Special thanks to W0DHB, N8MH, DK1TB, and K4FEG for all the help and guidance that got me this far. Without their help my amateur satellite operations would be much less enjoyable!

Brad has been busy working on his new satellite station and Satellite Chat Room.

Brad’s new webpages are a great resource for information about amateur satellite operations. If you work SSTV Brad’s call, KO6KL, may ‘look’ familiar to you! Please take a second to bookmark Brad’s web pages. Brad is updating everything constantly, so check back often, and help drive some traffic his way.

The images below show some of the changes in equipment and locations over the years.